For four years, Anna Moss has worked with several charities to provide them with marketing and fundraising advice and assistance as well as helping to increase awareness within the Manchester community and beyond.
February 20, 2015 Posted by Anna Moss

For four years, I have worked with several charities to provide them with marketing and fundraising advice and assistance as well as helping to increase awareness within the Manchester community and beyond. I work closely with four small to medium charities; Mustard Tree, The Factory Youth Zone, Bury Hospice and Grace’s Place Children’s Hospice.

I first got involved with charity work when I met the CEO of Bury Hospice, Jacqui Comber, at a business lunch. After speaking to her, one of the aspects she needed the most amount of help with was a well thought out marketing plan as well as being able to implement it. In many small to medium sized charities, from my experience, members of the team have a thousand and one jobs to do and so marketing and updating blogs, raising awareness and so on get left or shared amongst a number of people meaning whoever has a free five minutes will pick it up.

On Thursday 5th February, I won Manchester Champion in the Made In Manchester Awards 2015. The category was aimed at someone who has volunteered or helped to make real improvements in Manchester. I was overwhelmed and so proud to have even made it as a finalist let alone winning the award. I was interviewed for Manchester Champion by Tim Grogan, Paul McGlone and Nick Rose whilst suffering from Christmas lurgy (which had turned into a super strain after getting off a Ryanair flight the night before) and so I was a little less composed than I wanted to be! 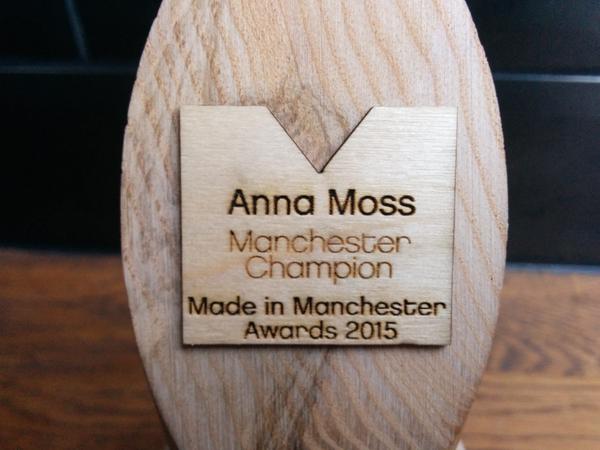 Anna Moss of FireCask was awarded Manchester Champion for developing the profile for a number of charities. Judges praised Moss’ commitment to dedicating large amounts of her own personal time to help support fundraising activities.

I’d like to say thank you to the judges for choosing me as the winner and I would like to dedicate my award to the amazing charities I work with. My work over the last few years has provided me with some of the most awe-inspiring, emotional, challenging and rewarding moments of my life and I would encourage anyone who can to help and assist a small to medium sized charity; it is hard work but so rewarding.

If anyone would like to help with any of the charities I support please get in touch. As well as co-owning FireCask and mentoring young people, my charity work is so important to me and if people could sacrifice even a small amount of time a week I believe we can do some great things for these sized charities across the country.

Over the next few months, together with another local businesswoman Kelly Harris, I am working on Challenge Manchester; four challenges for four Manchester charities. It is going to be a fantastic event held throughout June and July and is the first of its kind! We are looking for sponsors as well as teams to take part and more details will be released soon so keep your eyes peeled.

If you would like to become a sponsor, take part in or volunteer for Challenge Manchester, please fill out the form below.