Facebook Wants to Rid Your Need of Phone Numbers 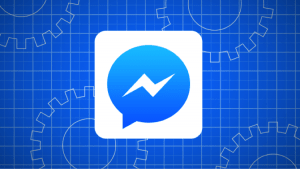 Facebook is always looking for ways to progress and to make itself a central focus in communication in all our lives. We've seen it buy off large messaging app Whatsapp for a staggering $19billion, Facebook Messenger's largest competitor, as well as introducing a video call option to battle users needs for face-to face interaction. Phone numbers can be a tricky business. Now they have taken it one step further, by trying to eradicate your need for a phone number by replacing one of their worst products going.
"Other folder? What other folder?"

We've all been there, desperately needing to get in touch with someone and when you go to scroll through your contact list their 11 digits are no where to be seen. A quick message to your friend, family member or colleague through Facebook may be able to solve this - but what if you're not Facebook friends either? Your message will most likely drift off and end up in the message graveyard known as the "other" folder. The no mans land of social media messages that few people even know exists. Here messages linger and fester for months due to the fact many users don't even know it exists, and with no notification to allow the user to be aware of the message it makes near impossible to contact someone you don’t have as a friend already. Much like when you don’t have someone's phone number and you try to call them. Just this week my own mother lost her purse whilst walking her dog, it took a whole week for her to even realise a stranger had found it and messaged her! Rolling out globally is Facebook’s replacement for the Other Inbox which it calls “Message Requests". It means all someone needs in order to contact you is your name, but you have control over whether they can contact you again.

So what exactly is 'Message Requests'?

Essentially, Message Request are like Friend Requests but for chat. Except they create a dynamic where non-friends are able to communicate effectively at the discretion of the recipient of the message. Therefore, with this it opens a whole new concept of connecting with people more easily with who you have just met and need to speak to and even businesses. 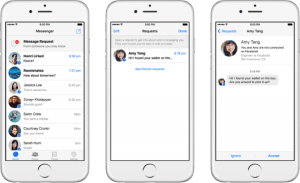 It goes a little like this, any message from a non-friend who doesn’t have your phone number will go into your Message Requests at the top of Messenger on mobile or in the Messages tab on web. From there you are then able to decide whether to respond or to permanently ignore. you'll then be able to see the sender's name along with a little information about them, such as: their city, their job, any mutual friends and, of course, their message. the sender wont ever know that you looked, if you decide to respond then the message will move straight into your normal inbox. If you ignore the message it will move straight to the Filtered Requests folder along with anything else that looks like spam.

One change to look out for is that friends-of-friends who try to contact you who don’t have you as a friend on Facebook will also be treated as Message Requests. Facebook no longer assumes that just because they're mutual friends that you care to speak to them!

Beforehand, someone couldn’t call or text you if they didn’t have your number. But once they did, you had almost no control. Even if you blocked their number, they could always change theirs or use someone else’s phone. Now with Facebook, someone only needs your name to contact you, but you can block them much more effectively. If you delete or ignore someone's message request then you'll effectively be able to ensure you wont here from them again.