We all make mistakes from time to time, however, most of these mistakes aren’t broadcasted to the masses on social media which, unfortunately, is the case for some brands.

Whether it’s a simple spelling mistake or an unintended double entendre, the timing and/or nature of these social media mistakes can have significant consequences for brands and their reputation.

To help you avoid any catastrophic social media blunders, we’ve taken a look at some of the mistakes that other brands have made. Read on to learn what to do, and what not to do as part of your social media marketing efforts.

Earlier on this year, Snapchat received severe backlash after it ran an advert making light of Rihanna’s domestic abuse.

The advert appeared on a Snapchat game called ‘Would You Rather’, whereby users are asked to decide between two unpleasant scenarios. One particular scenario that enraged the population was one where users were asked if they would rather ‘slap’ Rihanna or ‘punch’ Chris Brown.

Whilst Snapchat did eventually issue an apology for approving the advert, you have to wonder how a social media advert making light of domestic abuse managed to slip through Snapchat’s approval process in the first place.

Lesson: Triple-check everything. Approval processes exist for situations such as this, but sometimes this isn’t enough. Checking your social media ads multiple times and seeking approval from a range of people, will help you to spot any serious mistakes early on.

United Airlines was at the centre of a social media frenzy when footage emerged online of one of their passengers being forcibly removed from their seat due to overbooking on the flight. The video itself sparked public outrage, however, United Airlines’ CEO Oscar Munoz only made the situation worse when he issued the following statement after the incident:

This initial response received a wealth of criticism, so much so that a number of additional apologies were made by United Airlines in an attempt to rectify the situation.

Lesson: Own up to your mistakes. Empathising with those that were affected and hurt by your error is crucial, that’s why companies often issue public apologies after making an error. Make sure that you own up to what went wrong to avoid worsening the situation. 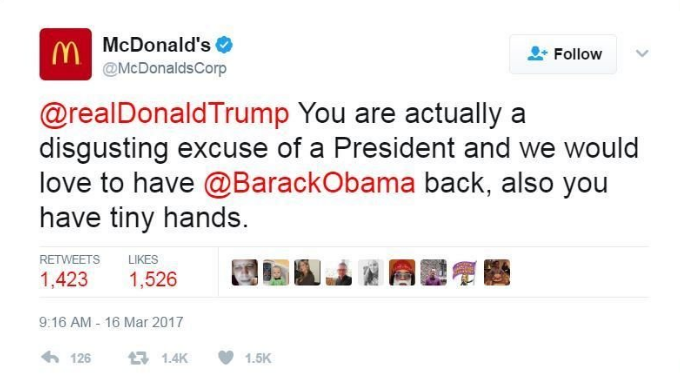 Last year, McDonald’s faced criticism from Donald Trump supporters, after it sent out a political tweet slandering the president from its corporate Twitter account. The tweet was in fact posted by hackers and was promptly deleted upon discovery. Despite this, it still managed to rack up over 1000 retweets and likes in the short duration of time it was online.

Whilst the tweet wasn’t sent by the company themselves, it shows a glimpse of the reaction you could face by publicising yours or your organisation’s political stance.

Lesson: Apply rigorous security measures and be careful with politics. Hackers are everywhere, so it’s important to update your security measures to make sure you won’t find yourself at the centre of a hacking scandal.

The value of social media marketing

The value of social media marketing knows no bounds, which is why almost every brand is connecting with their customers online and making the most of all the benefits that each social media platform has to offer.

However, social media does not come without its challenges. It takes careful consideration and online reputation management to make sure your brand’s online communications show your organisation in a positive light, and to help you connect with consumers on a meaningful level.

If you want to extract the maximum value from your social media marketing activities, we can help! We specialise in helping brands to create memorable social media campaigns, as well as assisting you in managing your day-to-day social media activities. This will help you to achieve your business goals and grow your following over time.

Get in touch with a member of our friendly team today, so that we can give you an expert insight into social media marketing.